What is the difference between the Jethro and G12 structure 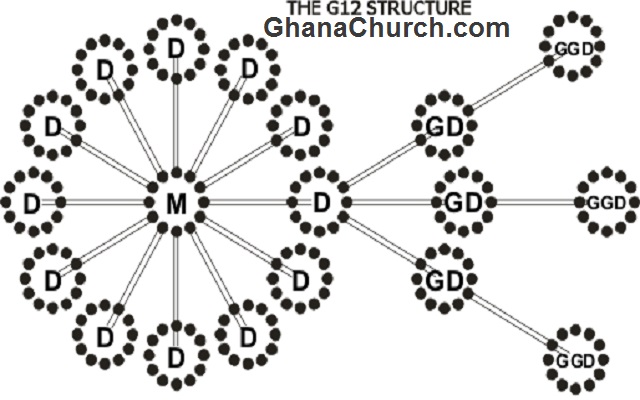 The 5 X 5 Structure. (The Jethro Structure)

This is the “classic” structure for Cell Churches around the world. Its major user is David Yonggi Cho, who has built the largest Church in the world in South Korea. Its name is derived from the advice that was given to Moses by his father in law, Jethro. Jethro told Moses to restructure Israel into groups of tens, fifties, hundreds and thousands. (Exodus 18:21)

The Cell Group in the Jethro Structure.

The Cell groups in the Jethro structure never grow larger than 15 members and will multiply when they reach that figure. When the group reaches about 7-8 believers, they start training up members in the Cell for ministry. Usually one of the members is identified as an intern (potential Cell Leader). This Intern completes the leadership training and is given opportunities to lead different parts of the Cell e.g. week 1- the Welcome section, week 2- the Worship section of the Cell meeting. Soon afterwards the intern Cell leader will lead the whole Cell meeting under the supervision of his Cell leader. Once the maximum size of the Cell has been reached, the Cell multiplies into two Cells of 7 and 8 members. The Intern leads the new Cell that has multiplied from the existing Cell. These 2 new Cells begin the process again and evangelise their social contacts to grow their Cell Group to 15 members, and then repeat the cycle.

This structure is called the 5 x 5 structure because of the way that it groups Cells together to form a Sub Zone. When there are 5 Cell groups, a successful Cell Leader is promoted to become a Zone Supervisor. This Zone Supervisor serves these 5 Cell leaders. The size of a Sub Zone is approximately 50 – 70 people. These Sub Zones are usually formed GEOGRAPHICALLY, i.e. the Cell Groups are all from the same geographical area. It is important to maintain no more than 5 Cell groups per Zone Supervisor. If this standard is not maintained then the lack of supervision and mentoring can cause serious problems. The Zone Supervisors are usually not paid workers and volunteer their services.

A Zone is formed when 5 Sub-Zones are grouped together. A successful Zone Supervisor is promoted to become a Zone Pastor. This Zone Pastor serves these 5 Zone Supervisors and their 25 Cell Groups. A Zone averages about 250 people. At this level most Jethro structured Churches hire the Zone Pastors full time.

Basic Principles of the 5 x 5 Model.

There must be a comprehensive training track (for example the E1-E4 equipping steps) that takes new believers to the level where they can lead Cells. The time period for this is 6 months to a year. If this does not happen then there would soon be a shortage of leaders to take the new Cell groups.
Each Cell leader in the 5 x 5 structure is responsible to mentor 2-3 members in his Cell. Out of these members the Cell Leader will choose his intern which will take the new Cell Group. Without intern leaders, the Cells will not be able to multiply.
A constant sense of urgency must be created to see every Cell Member reach out to unbelievers. The structure will become ineffective if the primary purpose of evangelism is not maintained.

5 x 5 Cell Churches around the world often have a ratio of at least one new convert for every 3-4 Cell members every 6-12 months. This means that the 5 x 5 structure has the potential to double every year. Most 5 x 5 Churches set their goal to double their number of Cells every year.

Mature Cell members can target family members or friends to start special outreach Cells at their workplace or recreational clubs. Basic Christian teachings can be presented alongside other courses of interest e.g. dressmaking or fishing. Visitors that become members can then join a normal Cell group or the outreach Cell can eventually become a normal Church Cell group. It is a proven fact that people from a similar homogenous group associate

with each other and Cells grow rapidly in an environment where these groups meet together.

César Castellanos recently introduced the Groups of 12 or G12 structure in Bogota Columbia. He first launched his Cell Church by using the 5×5 structure and grew to 3000 members. He then changed his structure, focussing on planting new Cells instead of multiplying existing groups.

How does the G12 structure work?

A Leader will start the structure by identifying 12 people that will form part of his Cell Group. This Cell group will be called a Mother Cell group. And the people that he starts with can be called his daughters for explanation purposes.

The leader then imparts valuable principles and goals to these 12 people of his Mother Cell. The relationship between the Leader and these 12 Cell poeple will never be broken if they plant their own Cell groups. The goal of this Mother Cell is for each person to plant his or her own Cell Group on a different evening. I.e the “mother” Cell meets on a Monday evening, the Cell members are encouraged to plant their Cell Group on Tuesday evenings. When one of the Members have 3 or 4 contacts they plant their own G12 Cell group on a different day and they form a Daughter Cell. The new Cell Leader continues to meet with his “mother” Cell on Mondays and meets with his own Cell group on Tuesdays.

Principles of a G12 structure Every person in a G12 Cell is viewed as a potential leader. All of the people of a G12 Cell group are challenged to lead their own Cell group. The Cell group might become larger than 12 people because a) a couple is counted as 1 member and b) a person only becomes a MEMBER once he has planted his own G12 Cell group. A G12 Cell might reach 17 people – 12 of these people plant their own G12 Cells and become Members of the Cell. The remaining 5 people get given to one of the Members to form part of their G12 Cell.

Every leader in the G12 Structure attends 2 weekly meetings. One meeting with his leadership or (mother) Cell and another meeting with his own G12 Cell Group or (daughter) Cell. Thus they never leave their mother or leadership Cell. The growth is therefore not by multiplication but by planting new Cells.

In this structure there is no need for Zone Supervisors, Zone Pastors or District Pastors. The instructions are given by the Senior Pastor to his G12, these then pass it down to their groups, who in-turn pass it one down the structure. In Cesars Church a Leader only becomes full time when they have 500 Cells in their structure. There is therefore no need to train these leaders, but this makes reporting difficult and many other problems could arise.

The equipping system has to be rapid enough to keep up with the planting of Cells. In 3rd world countries G12 works well, because information is passed verbally down the Cell network from mother to daughter, to granddaughter to great- granddaughter.