Evangelism is the preaching of the Gospel – The Etymology 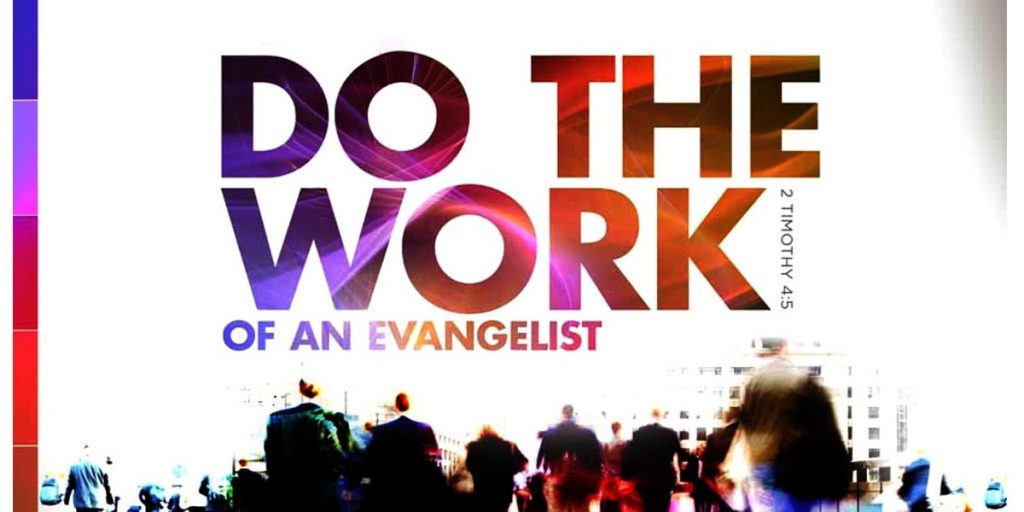 Evangelism is the preaching of the Lord with the intention of exposing God’s love to all mankind through Jesus Christ. The spreading of the Christian gospel by public preaching or personal witness.

Christians who specialize in evangelism are often known as evangelists, whether they are in their home communities or living as missionaries in the field, although some Christian traditions refer to such people as missionaries in either case. Some Christian traditions consider evangelists to be in a leadership position; they may be found preaching to large meetings or in governance roles.

Christian groups who encourage evangelism are sometimes known as evangelistic or evangelist. The scriptures do not use the word evangelism, but evangelist is used in (the translations of) Acts 21:8, Ephesians 4:11, and 2 Timothy 4:5.

Etymology
The word “evangelist” comes from the Koine Greek word εὐαγγέλιον (transliterated as euangelion) via Latinised evangelium as used in the canonical titles of the Four Gospels, authored by (or attributed to) Matthew, Mark, Luke, and John (also known as the Four Evangelists). The Greek word εὐαγγέλιον originally meant a reward given to the messenger for good news (εὔ = “good”, ἀγγέλλω = “I bring a message”; the word “angel” comes from the same root) and later “good news” itself.

The verb form of euangelion, (translated as “evangelism”), occurs rarely in older Greek literature outside the New Testament, making its meaning more difficult to ascertain. Parallel texts of the Gospels of Luke and Mark reveal a synonymous relationship between the verb euangelizo (εὑαγγελίζω) and a Greek verb kerusso (κηρύσσω), which means “to proclaim”.

Proselytism
Christians would clearly distinguish between evangelism and proselytism, with the latter being viewed as unethical because it involves the abuse of people’s freedom and the distortion of the gospel of grace by means of coercion, deception, manipulation, and exploitation. Within Christianity, the label of ‘proselytism’ generally arises when one group does not approve of the missional activities of another, particularly when one group is losing members or the potential exists for this to occur.

Different denominations follow different theological interpretations which reflect upon the point of who is doing the actual conversion, whether the evangelist or the Holy Spirit or both. Calvinists, for example, believe the soul is converted only if the Holy Spirit is effective in the act.

Catholic missionary work in Russia is commonly seen as evangelism, not proselytism. Archbishop Kondrusiewicz openly stated, “that proselytism is absolutely unacceptable and cannot constitute a strategy for the development of our structures either in Russia or in any other country in the world”. Especially regarding claims by the Orthodox church that spreading the faith and receiving converts amounts to proselytism, the Catholic Church’s Congregation for the Doctrine of the Faith issued a document called “Doctrinal Note on some Aspects of Evangelization” which states that evangelism is “an inalienable right and duty, an expression of religious liberty …”, and added, “The incorporation of new members into the Church is not the expansion of a power group, but rather entrance into the network of friendship with Christ which connects heaven and earth, different continents and age. It is entrance into the gift of communion with Christ….”

In recent history, certain Bible passages have been used to promote evangelism. William Carey, in a book entitled, ‘An Enquiry into the Obligations of Christians to Use Means for the Conversion of the Heathens’ popularised a quotation, where, according to the Bible, during his last days on earth Jesus commanded his eleven disciples (the apostles) as follows:

Therefore go and make disciples of all nations, baptizing them in the name of the Father and of the Son and of the Holy Spirit, and teaching them to obey everything I have commanded you. And surely I am with you always, to the very end of the age. –  Matthew 28:19,20 NIV

However, recent scholarship by Chris Wright and others has suggested that such activity is promoted by the entire Bible, or at least the wider term ‘mission’, although the meaning of the word ‘mission’ and its relationship to ‘evangelism’ is disputed amongst Christians.

Modern methods
Breaking from tradition and going beyond television and radio a wide range of methods have been developed to reach people not inclined to attend traditional events in churches or revival meetings.

Dramas such as Heaven’s Gates, Hell’s Flames have gained enormous popularity since the 1980s. These dramas typically depict fictional characters who die and learn whether they will go to heaven or hell.

Beginning in the 1970s, a group of Christian athletes known as The Power Team spawned an entire genre of Christian entertainment based on strong-man exploits mixed with a Christian message and usually accompanied by an opportunity to respond with a prayer for salvation.

The Christian music industry has also played a significant role in modern evangelism. Rock (and other genres) concerts in which the artist(s) exhort non-believing attendees to pray a prayer for salvation have become common, and just as common are concerts that are focused on activity not necessarily on prayer and conversion, thus forming an environment that is not driven by conversion, but instead relaying of a message.

Evangelists such as Reinhard Bonnke conduct mass evangelistic crusades around the world. Hundreds of church denominations and organizations participate in an evangelism movement known as the Billion Soul Harvest, which is a comprehensive initiative to convert a billion people to Christianity.

Evangelists
Billy Graham in Düsseldorf (1954):
Sometimes, the regular minister of a church is called a preacher in a way that other groups would typically use the term pastor. The evangelist in some churches is one that travels from town to town and from church to church, spreading the gospel of Jesus Christ. Many Christians of various theological perspectives would call themselves “evangelists” because they are spreaders of the gospel. Many churches believe one of their major functions is to function as evangelists to spread the evangelist belief that Jesus is savior of humanity.

The title of evangelist is often associated with those who lead large meetings like those of Billy Graham, Luis Palau and J.A. Pérez possibly in tents or existing church buildings, or those who address the public in street corner preaching, which targets listeners who happen to pass nearby. It can also be done in small groups or even on a one-to-one basis, but actually it is simply one who spreads the gospel. Increasingly, the internet enables anyone to become an Internet evangelist.

Missionary work
This section does not cite any sources. Please help improve this section by adding citations to reliable sources. Unsourced material may be challenged and removed. (June 2016) (Learn how and when to remove this template message)

The New Testament urges believers to speak the gospel clearly, fearlessly, graciously, and respectfully whenever an opportunity presents itself, incumbent upon a commitment to hold and revere God as the core/center of their lives (see Colossians 4:2-6, Ephesians 6:19-20, and 1 Peter 3:15).

Throughout most of its history, Christianity has been spread evangelistically, though the extent of evangelism has varied significantly between Christian communities, and denominations. Evangelism, apologetics and apostolic ministry often go hand in hand. An ἀπόστολος (apostolos) is literally “one who is ordered forth” and refers to the missionary calling of being ordered forth into the world by the initiation of God. An example of an interplay between Evangelism and Apologetics can be seen in the USA when upon door to door Evangelism the prospect is an unbeliever and challenges the Evangelist wherein the Evangelist then follows into the role of the Apologist in defense of their faith with the hope that Evangelism may be restarted. Since missionaries often travel to areas or people groups where Jesus is not yet known, they frequently take on an evangelistic role. But the apostolic or missionary calling is not necessarily the same (and it is a misnomer and misinterpretation to equate them), as there are many who serve in missionary, church planting, and ministry development roles who have an apostolic calling or serve in an apostolic role but whose primary duty is not evangelism.

John 15:16 ” Ye have not chosen me, but I have chosen you, and ordained you, that ye should go and bring forth fruit, and that your fruit should remain: that whatsoever ye shall ask of the Father in my name, he may give it you.”