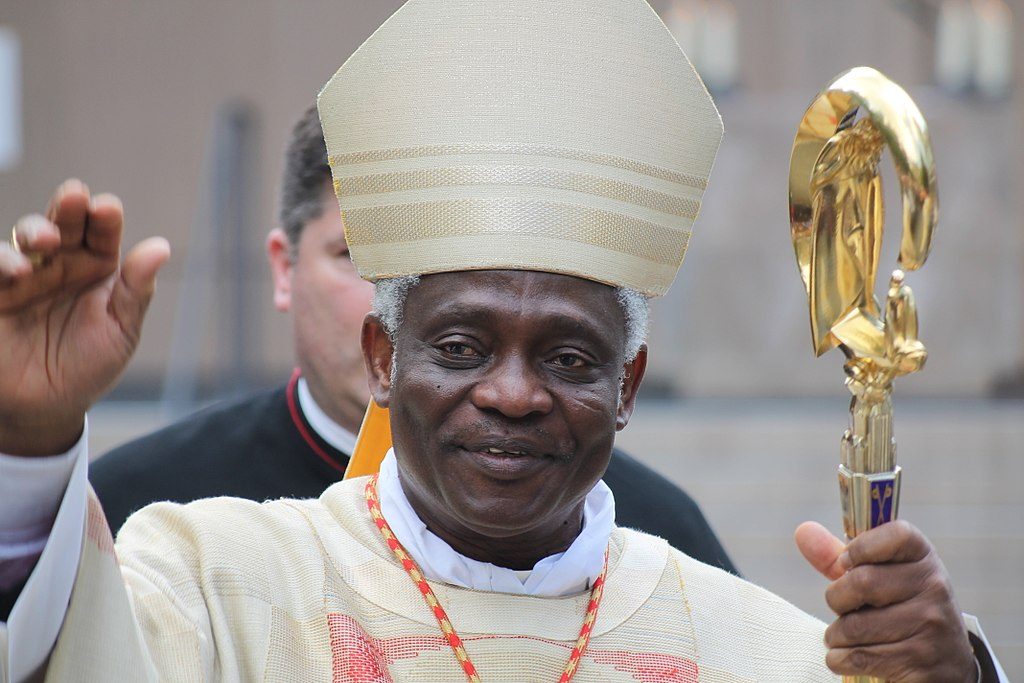 Peter Kodwo Appiah Turkson was born on 11th October 1948 and he is cardinal of the Roman Catholic Church but originated from Ghana. He was president of the Pontifical Council for Justice and Peace from 24 October 2009 to 1 January 2017. Pope Francis named him the first prefect of the Dicastery for the Promotion of Integral Human Development, which began operations on 1 January 2017.

He previously served as Archbishop of Cape Coast. He was made a cardinal by Pope John Paul II in 2003, and is widely regarded as papabile, that is, a candidate for election to the papacy. The Tablet has described him as “one of Africa’s most energetic church leaders”. Turkson speaks English, Fante, French, Italian, German, and Hebrew, in addition to understanding Latin and Greek.

Turkson was born in Was saw Nsuta in Western Ghana to a Methodist mother and a Roman Catholic father. He is the fourth child of ten children. His mother sold vegetables in the open market while his father worked as a carpenter. He had a paternal uncle who was a Muslim. He studied at St. Theresa’s Seminary in Amisano and St. Peter’s Regional Seminary in Pedu before attending St. Anthony-on-Hudson Seminary in Rensselaer, New York, where he graduated with an M.A. in Theology and a Master of Divinity. He was ordained to the priesthood by Archbishop John Amissah on 20 July 1975. Additionally, he earned a licentiate in Sacred Scripture from the Pontifical Biblical Institute in Rome in 1980. From 1987 to 1992, he pursued doctoral studies in Sacred Scripture at the Pontifical Biblical Institute but his work on his thesis was interrupted by his appointment as archbishop of Cape Coast.

He returned to St Teresa’s for a year, 1980–81, and became vice-rector at St Peter’s Seminary in 1981. He also did pastoral work in a parish annexed to the seminary.

Episcopal career
On 6 October 1992, Turkson was appointed Archbishop of Cape Coast by Pope John Paul II. He received his episcopal consecration on 27 March 1993 from Archbishop Dominic Kodwo Andoh, with Archbishops Peter Poreku Dery and Peter Kwasi Sarpong serving as co-consecrators. He served as President of the Ghana Catholic Bishops’ Conference from 1997 to 2005, and as Chancellor of the Catholic University College of Ghana beginning in 2003.

On 16 October 2010 Pope Benedict named him to a five-year renewable term as a member of the Congregation for the Doctrine of the Faith.

Cardinal Turkson delivered the plenary address of the 2011 Catholic Social Ministry Gathering in Washington, D.C., on the theme of “Protecting Human Life and Dignity: Promoting a Just Economy,” is sponsored by 19 Catholic organizations, including the U.S. Catholic bishops. In a recent interview with CNA, Turkson said he has learned from past experience that the Church’s justice and peace terminology often needs clarification for an American Catholic audience. Key terms used by the Vatican such as “social justice” and “gift” are not always understood the way the Vatican intends, he said. “We found out that some of the vocabulary which is just taken for granted and used freely may not always have the same sense or may have had some nuances which sometimes are missed because of the way the terms are used in the American political context”. Since 2009 Turkson had been president of the Pontifical Council for Justice and Peace.

In the spring of 2011, Pope Benedict XVI sent Cardinal Turkson as a Vatican mediator to contribute to a diplomatic, non-military solution to the civil conflict in Ivory Coast, where Laurent Gbagbo had refused, in spite of international condemnation and local protests and resistance, to step aside and hand over power to Alassane Ouattara, the certified winner of the presidential election. Atrocities have been committed by both sides.

In October 2011 Cardinal Turkson called for the establishment of a “global public authority” and a “central world bank” to rule over financial institutions that have become outdated and often ineffective in dealing fairly with crises. His text was very specific, calling for taxation measures on financial transactions. It said that “The economic and financial crisis which the world is going through calls everyone, individuals and peoples, to examine in depth the principles and the cultural and moral values at the basis of social coexistence”. The document condemned “the idolatry of the market” as well as “neo-liberal thinking” that looked exclusively at technical solutions to economic problems. “In fact, the crisis has revealed behaviours like selfishness, collective greed and hoarding of goods on a great scale.” It added that world economics needed an “ethic of solidarity” among rich and poor nations.

In October 2012 Turkson showed a YouTube video called “Muslim Demographics” at an international conference for bishops. Critics labelled it inaccurate and alarmist as regards Moslem growth within Europe.

In 2016 Pope Francis sent Cardinal Turkson as his special envoy to pursue peace in South Sudan: to urge for an end to violence in the country, and to help establish dialogue and trust between the warring parties. Turkson traveled to Juba to support the archbishop and to meet with the country’s leaders. He also carried with him a letter from Francis for President Salva Kiir and one for Vice President Riek Machar who are historic enemies and represent different ethnic groups.

In October 2009, noting that Barack Obama was president of the US and that former UN Secretary General Kofi Annan was born in Ghana, Cardinal Turkson said that “if God would wish to see a black man also as pope, thanks be to God”. Catholic Church chronicler Rocco Palmo believes that Turkson’s status as a potential papabile was enhanced in 2009 when he was named spokesman for the Second Synod for Africa and head of the Pontifical Council for Justice and Peace.

Following the announcement on 11 February 2013 of the planned resignation of Pope Benedict XVI, Turkson was identified by the media as a possible candidate for the papacy. Bookmakers Paddy Power and Ladbrokes made Turkson the favourite to be elected pope, with Paddy Power giving 2/1 odds. Odds variously of 4/1, 11/4 against (by PaddyPower), and 5/4 against (by Ladbrokes) were given. Parties un