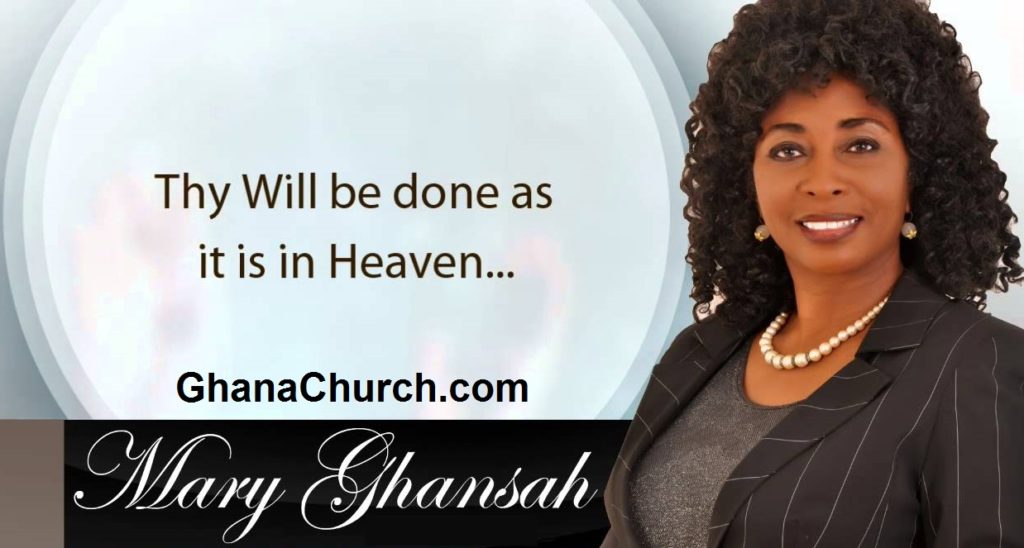 Rev Dr Mary Ghansah, affectionately dubbed as the lady-with-the-guitar is one such a woman that has come to symbolize the Woman-of-God in Ghana, through the utilization of her providential talent and the agility in the delivery of her musical prowess.

Dr Mary Ghansah is an ordained Minister of Elohim, the out-pour of testimonies that are been meted to her presence suggests she is such a person that has touched the lives of many and arrested lots of souls to the custody of God, through her ministrations.

Rev Mary qualifies as one of a kind that is the making of her own pedigree and in fact could be numbered as a virtuous woman, if ever there is a company of them around.

This is also a woman that time has become the rightful judge of the controversy that surrounded her pioneering work in the gospel music industry of Ghana.

Born to the late Mr Joseph Ghansah and Madam Elizabeth Anderson all partly from Senya Breku, Anumabu, Saltpond and Accra in the Central and Greater Accra Regions of Ghana, on the Wednesday of May 13, 1959.

Rev Mary began her life in Tema with her Pentecostal parents, now of the Fadama branch of the Church of Pentecost in Accra.

Rev Mary is the eldest of five siblings that comprise of two other women and two men.

Rev Mary is a product of the then P&T Engineering College of Ghana, where she pursued a career leading to telephone receptionist.

She has strive to complete her tertiary education at The Glory Leadership College, where she studied theology and counseling.

The man in the life of Rev Mary is Mr Carl Wiafe, a communications consultant, who has become the invisible rock behind her career.

Mr Wiafe indeed is a supportive and a loving husband, who allows her the free hand to operate and never mind leaving his job behind to accompany her on many of her career tours.

Mary became a musician at the time she discovered her potentials with the Power House Evangelistic Ministry at Tema in 1974 at the age of 15 years.

The noble brains behind her aspirations were Pastor Apenteng the founder of Church on the Rock in Koforidua and Morrison Dove who at the time was a student.

These personalities were the directors God sent into the beginning parts of her musical career. They encouraged, guided her in songs ministrations and writings.

They indeed had time for her and she can say with pride that their counsel has never been in vain.

Before Mary became an independent musician, she was a member of the Power House Evangelistic Ministry in 1974 and the Glorious Vibration Incorporated in1978.

“Praise & Worship in Zion” was the three-day evangelism fiesta at the Meridian Hotel in Tema that catapulted Rev. Mary into her ministration career in 1986.

Ever since then Rev. Mary has criss-crossed Ghana with her team of musicians and evangelists in a crusade to impart the Word of God to the many youth in second cycle educational institutions and churches.

There are a lot of them that have been healed of their sicknesses, delivered from their spiritual bondage and those souls that have been arrested to the custody of the Almighty God.

All these have featured in the testimonies that have been showered unto her by the many that she now meets in the cities, towns and villages of Ghana.

Rev Mary is a talented gospel musician of our era; a prolific song writer, who composes her own songs. Above all her stage craft in delivering her performances surpasses many in the gospel industry.

Even though confronted daily with production, marketing and financial challenges just like any other musician, she never thought of turning her back to her musical career.

In the forty years of her career as a renowned gospel musician, Mary has had to her credit over twenty gospel music Albums of which ONIPA BEN NI and NYAME NDAE are her favourite.

She has also won many awards, which include: the Entertainment Critics and Reviewers Association of Ghana (ECRAG) Award for Best IN CONSISTENCY Gospel Album of the Year-1993; Unity Award; Freedom Concert Award-2013; and the Foot Print Music Award-2012, all to the Glory of God.

Her musical career has granted her the opportunity to travel to France, Belgium, Togo, Ivory Coast, UK, USA, and many other places in Ghana.

Some of Mary’s worship songs have been adopted for worshiping by the Christian churches in Ghana. Controversy surrounded her earlier musical career, when she pioneered music albums that featured worship songs-in-tongue; the kind of lyrics was considered to be an anathema to the music and press fraternity of the country.

Mary Ghansah has a lot of admirers including fellow musicians like Stella Ahenewa Dugan who professed that she admires Mary Ghansah a lot because of her tenacity in music, and the Daughters of Glorious Jesus who take her as their mentor.

Some of Mary’s music contemporaries have been the singing duo of the Tagoe Sisters, who she has been in constant communion with.

Currently, Rev Mary is a member of the ICGC Calvary Temple at Sakumono, where she leads in their Praise and Worship sessions of the church. She loves cleaning and like being alone.

She also admires nature and love being around God’s creations. Rice with kontomire or cabbage stew goes for her best food.

Rev Mary also serves on the boards of some statutory and corporate institutions. These include:
● Deputy Director of Gospel Music, MUSIGA
● Member of the Ghana Gospel Industry Award Board
● Former Member of GAMRO board
● Board Member, Star of Hope( Swedish NGO)

Though there was a break in her ministering career for some time, this break saw Mary Ghansah undertake some other activities such as: