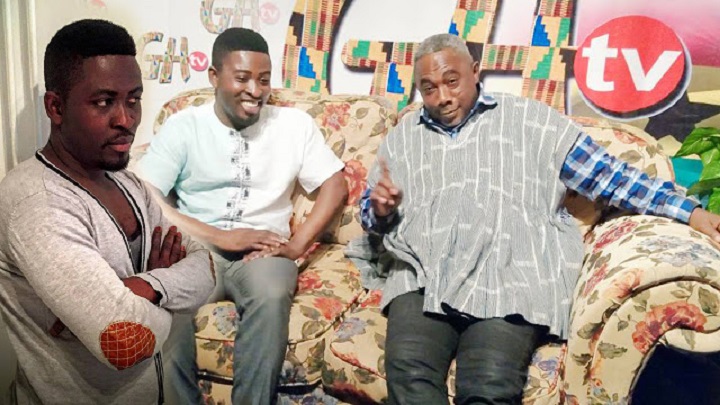 TODAY, as GHANASKY.COM and ACCRA24.COM took our journalistic flight, we landed in a wonderful country in Europe – the Netherlands, where almost every Ghanaian and other nationals has being a follower of  GHtv Holland, owned by Ghanaian media icon Richard Dapaah, know in showbiz as “Osikani”, an entrepreneur and TV Personality, who currently hosts the popular award-winning TV show in Europe called “Abrabo Talk Show“.

He also won the male TV Personality according to OFM Computer World Europe’s direct awards and Osikani is  also the CEO of established most watched Free-to-air Ghanaian television station in the Netherlands and across the internet.

Osikani’s eloquence and intelligence paradigm of hosting movie stars, music super stars etc has earned his GHtv Holland, one of the most watched Ghanaian TV online.

The answer was, if it is business one is doing, then is OKAY but acting Spiritual things in the movies like “Prophesying” or “Casting Out Demons” as an Apostle or a Pastor etc in MOVIES is totally WRONG and lies, one must not do that, even if it pays money.

Apostle John Prah is an articulate, humble, strong and purpose driven man in most of his movies.

In order for GHANASKY.COM and ACCRA24.COM to reach our goal, we made it a treasure for valuing morals of Apostle John Prah and bring meaning into the interview of Osikani on GHtv Holland.


Here comes the interrogation of Osikani and Apostle John Prah:
Apostle Prah said; he usually go to Atwea mountains to pray and seek the face of God. It was during one of his fasting and prayers when he mate a man who introduced himself as the Director of Miracle Films Productions.

Prah also indicated that he discussed the issue with his wife, Rita Prah before eventually making a final decision.


“I hesitated about the decision but following consultations with my wife, Rita, my dad and my spiritual father, I was finally convinced that it was a good idea because through my roles, I could transform people’s lives,”  Said by Apostle John Prah


“Film acting is to act and therefore acting something that is not reality is lies” Said by International Evangelist Enoch.

According to GHANASKY.COM interviewed with Ghana-German National Evangelist Enoch Kwame Adomako, one cannot act the Holy Spirit, so acting Holy Spirit is impiety; that is lack of reverence. He moves on to say, everything that depends on acting is not from the Spirit of GOD.

Evangelist Enoch said, all the actions in the movies are camera tricks and if they are acting for money is not a problem but one cannot act the SPIRIT OF GOD.