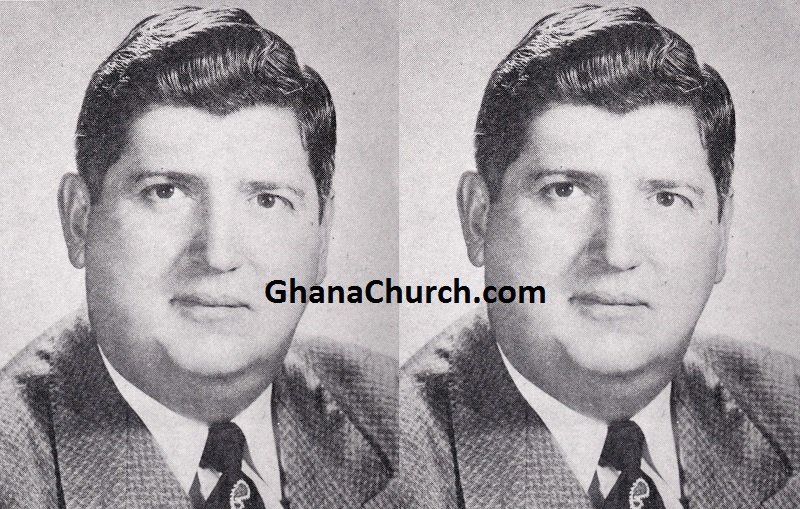 Evangelist Jack Coe was a Pentecostal evangelist, also known as “the man of reckless faith”. He one of the first faith healers in the United States with a touring tent ministry after World War II.

Jack Coe was ordained in the Assemblies of God in 1944, and began to preach while still serving in World War II.

Coe was considered a radical evangelist because he, along with others, was doing much to combat racial prejudice in the Church.

At a time when society was calling for segregation, Coe strongly encouraged all races and cultures of the community to participate in his meetings.
room for a lukewarm response!

“‘The difference is that the Holy Ghost is in our shout, and it bothers the neighbors, keeping them awake…and it causes the beer joints to close their doors.'”1

Jack Coe was a large, domineering man with a tactless sense of humor in the healing tent. And he was a loving, compassionate “father” figure to the orphans in his children’s home.
As one of the main leaders in the Voice of Healing revival, Coe was either greatly loved, or greatly despised.

He was raised without a father, so he learned as an adult to make God his Father. As a result, he had no problem putting men— no matter how high their denominational title—in their place, that is, if they tried to override the voice of God. The revivalist’s dynamic personality left little
Coe was considered a radical evangelist because he, along with others, was doing much to combat racial prejudice in the Church. At a time when society was calling for segregation, Coe strongly encouraged all races and cultures of the community to participate in his meetings.

Jack Coe was born on March 11, 1918, to Blanche and George Coe of Oklahoma City, Oklahoma.
He was one of seven children. Blanche had been raised a Baptist, but when Jack was born it isn’t certain that she was born again.
It is believed that his father was born again at a Billy Sunday meeting, but George never attended church afterwards.
Coe’s grandparents were Christians, so his father had been raised in a good home. Besides the positive atmosphere, his grandparents were also excellent providers, and left a considerable inheritance for Coe’s father.
But their solid principles of stewardship never seemed to rub off on his father, George. He had a bad habit of gambling and drinking. His mother tried to attend church for awhile, but since George wouldn’t go with her, she stopped going too.
Coe always believed things would have gone differently for his family if his mother would have continued in church and sought to pray for his father.
When Coe was five years old, a moving van backed up to their home. When he saw it, he got all excited, thinking something new was being delivered.
He watched as the men approached his mother and spoke to her. Then he watched his mother turn pale and break out in tears.
As he watched the men, young Coe realized that nothing new was coming out from that truck. Instead, these men were removing from their home what furniture they had! George had left them all after gambling away every possession in their home—and these men were coming to collect!
As the van pulled away, his mother was left to face the future with her seven children, having no one to turn to. So she knelt on the porch and began to pray. It was the first time Coe saw his mother pray!
Things got worse. The next day, a man came to see their house. Thinking he came to buy it, Blanche informed him that it wasn’t for sale.
“I didn’t come to buy the house,” the man said, “it’s already mine! I’m very sorry, but you’ll have to move out.” It was unbelievable. His father had also gambled away their home.

NO FRIEND IN THE BOTTLE

Coe remained at the orphanage for eight years. During this time, he knew very little about God. When he turned seventeen, he started to drink and carouse, and before long, he too, like his father, had become an alcoholic.
There were times during his alcoholic enslavement when Coe sought to know God. But everyone who went to the church he attended occasionally, lived uncommitted lives. They didn’t have his answers. So, he sank more deeply into sin.
Soon, Coe’s health began to suffer. He had developed ulcers in his stomach due to the alcohol, and his heart was beating twice as fast as the normal rate. He had nearly drank himself to death, and the doctor cautioned him that the next drink could kill him.
So Coe tried to make a new resolution to help himself. But still not knowing God, he wondered who could help him keep this commitment. This led him to move to California. His mother lived there, and if anyone could help him, she certainly could.
Upon his arrival, his sister invited him to a dance. But soon, Coe found himself at the bar while the others danced. He was brought home that night in a drunken stupor, without his mother knowing about it.

Bob Davidson was a young boy in the children’s home. His own father had been crippled, and could not take care of his family. Although Coe was a national evangelist, Davidson said he was like a “compassionate father” when he was at the home. Coe was remembered by some as always being happy. He was a fun-loving man, who enjoyed playing jokes on people. Even so, Coe heard from God concerning the children, and knew when to draw the line.
Once, after being at the home for several years, Davidson had wanted to go to a State Fair with some of his friends. When he went to ask Coe for money to go, Coe told him that if he finished his chores, he could go.
Davidson worked hard to complete his duties in time to go. Running to meet Coe, he shouted that he had finished all his work. About that time, the guys he was going to the Fair with pulled in front of the home in a brand new Plymouth Fury. They waved to Davidson, telling him to hurry and get in the car so they could go.
Watching the scene, Coe gave Davidson money for his chores, but changed his mind about the boy going to the Fair. Coe told him, “God said not to let you go.”
Of course, Davidson didn’t understand. He cried and yelled at Coe, “You lied! You lied!” Then he ran to another part of the home.
After a while, Coe found Davidson and said, “If you really want to go to the Fair, I’ll take you myself. But God said you could not go with those boys. I didn’t feel right about letting you leave.”20
So Davidson dried his face and left for the Fair with Coe. As they traveled down the road, an ambulance and a sheriff’s car passed them at high speeds, heading straight ahead of them.
Driving up ahead, nothing could match the horror of what they saw. There in the ditch, was the brand new Plymouth Fury, crushed and mangled. Beside it, scattered along the ground, were the broken bodies of Davidson’s friends—all of them dead. Coe and Davidson stood by the road, holding one another, and crying.

When Coe finally held a meeting in Springfield, Missouri, the Assemblies of God began to oppose him. They weren’t comfortable with divine healing and deliverance ministries. But Coe had a volcanic personality, especially when it came to someone trying to dictate or control his call. He tried to cooperate with their suggestions and criticisms, and even sponsored the Pentecostal Evangel (the official Assemblies of God publication) at one of his meetings, receiving one hundred twenty new

subscriptions for it. He also took up a large offering for

No medicine was ever
offered or permitted in the building, and patients were taken nightly to the Dallas Revival Center.
their missions program.
But Coe wasn’t a denominational man. As much as he tried, he couldn’t stand for all the restraints and regulations placed upon him. He felt the Assemblies of God leaders no longer believed in the miraculous. So he wrote a bold letter, suggesting they replace their
present leadership with men who believed in the miraculous power of God. The General
Council found his letter offensive.
Finally, in 1953, Coe was expelled from the Assemblies of God. They had become frustrated by his “extreme independence” and embarrassed by some of his methods. A bitter feud followed. It has been said that Coe even thought of establishing a split-off group called the Fundamental Assemblies of God, but decided to pursue his own call, instead.24

Soon Coe began grasping the vision for his own independent church. It would be a revival center where evangelists could come and hold continuous campaigns. It would provide accommodations large enough to hold the people their ministries drew. And it would eventually be duplicated around the nation in every major city. Coe realized he would be highly criticized for this move, but he decided to pursue the dream regardless of persecution, and in 1953 he started the first one, the Dallas Revival Center.
In the spring, Coe began to ask God why people weren’t healed. Though he had seen thousands healed, he had also seen thousands walk away without their healing. After a season of prayer, God revealed to Coe that many didn’t understand how to receive healing and that they needed instruction in His Word concerning His will and His power. This was a tremendous revelation in that day! Up until then, most of the Voice of Healing evangelists depended upon the anointing of their healing gift, and many knew little about what the Word of God had to say on the subject.
So in an effort to strengthen the faith and dispel the doubts of those who were seeking healing, Coe built a faith home. Here the sick would be allowed to remain until they received their healing. Prayer and classes on healing would be offered daily. Finally, after months of struggling through the city’s resistance to his building plans, Jack Coe’s Faith Home opened next door to his Herald of Healing Children’s Home in the summer of 1954. In September, Coe’s Faith Home received its first full-time patient. From there, the numbers grew. No medicine was ever offered or permitted in the building, and patients.